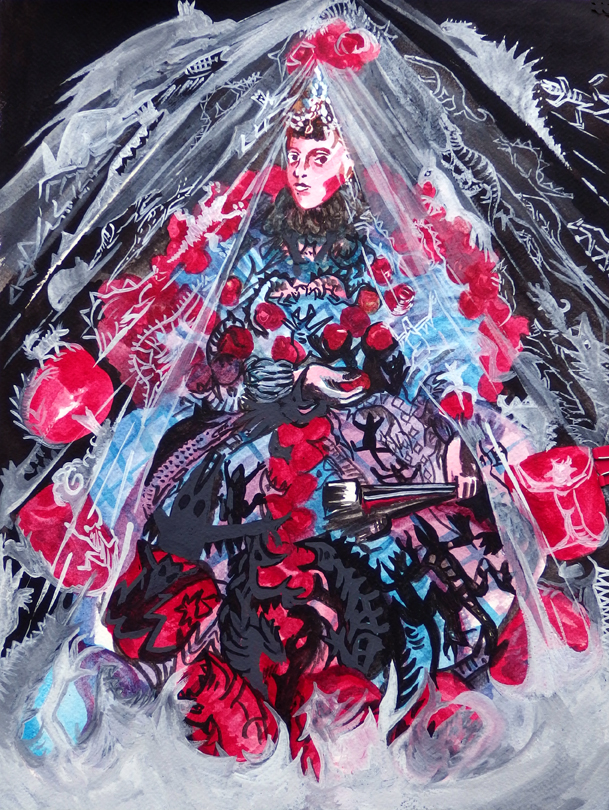 Pola Dwurnik is not only a painter; through her paintings and drawings she is also a song-writer. Her lyrics are full of mystery and intrigue. They are about love, crime, sex and prayer – all the elements that make up a good song or story. In society and the media, these stories are often told from the man’s point of view. It is time to listen to a woman’s voice, to a Queen of Painting.

As the world around us is changing and some voices – including in Pola’s native Poland – cling desperately to tradition, Pola’s work represents a break with the past and a challenge to conventional wisdom. Her’s is not the motherly voice that serenades us into feelings of calm and security. It is the voice of strength and conviction that conveys a sense that things will never be the same. In Pola’s kingdom, which often interweaves the animal and human worlds, audacity is celebrated and it’s only natural that the protagonist is a woman – and she comes out on top. In her book “GIRL ON CANVAS“, Pola’s friend and journalist Jerzy Szgiel writes “Painting your nails is not the same as sharpening your claws and yet they are somehow related.”

While Pola’s art is often a depiction of herself and her own unique fantasy world, make no mistake. The emotions, fears, anxiety and mystery that her pictures convey are just as much a reflection about us – her subjects – as it is about the Queen of Painting. Pola works in her studios in Berlin and Warsaw.

This entry was posted in Artists and tagged Pola Dwurnik, Wroclaw.